“Were you ever really you, or were you just Jakob’s wife?”

It’s a fair question, and Anne (Barbara Crampton), the titular spouse in director Travis Stevens’ latest horror film Jakob’s Wife, doesn’t quite know how to answer it. Her husband Jakob (Larry Fessenden) is a pastor who isn’t very fond of practicing what he preaches. He pontificates from the pulpit about men respecting and loving their wives, but in his own life he diminishes Anne at every opportunity: he interrupts her, speaks for her, or simply acts as if she isn’t there. When Anne is attacked by a vampire after rekindling an old flame, she comes into her own, testing Jakob’s faith and letting him know that she finally recognizes her innate power…and that he will have to do the same.

Despite its intriguing premise, Jakob’s Wife can be maddeningly uneven at times. The first act is a moving character study of a quietly suffering wife whose repression of her true self comes back to bite her (pun absolutely intended). The third act is a campy delight that delivers on the feminist vampire story promised by the beginning of the film. The middle of the film meanders, though, fumbling for a balance between the quiet, if not subtle, drama of the first act and the tongue-in-cheek humor of the finale. In addition to the uneven tone and pacing issues, the occasionally weak dialogue threatens to undermine the captivating lead performances. Still, the film adds vital elements to the horror genre with its study of feminist self-actualization through vampirism. 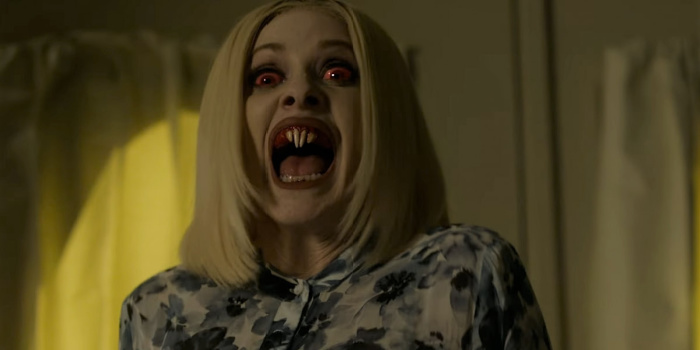 One of the most intriguing aspects of the film is its surprising approach to vampire lore. Anne likes who she is as a vampire. She is physically strong, her hair and wardrobe improve by leaps and bounds, and she feels more alive than she has in years. As a creature of the night, Anne becomes her own woman again. So it is disheartening to think that she will simply trade one patriarch — her overbearing, hypocritical husband — for another: her Master, the powerful vampire who turned her. Jakob’s Wife turns that idea on its head, though, playing with viewer expectations and using the characters’ knowledge of vampire lore to tease out even more revealing character work. The Master (iconic horror chameleon Bonnie Aarons) surprises us all — Anne, Jakob, and the audience — with a refreshingly unique and strongly feminist take on traditional vampire films.

The lead performances from Crampton and Fessenden carry the movie, and Barbara Crampton is, as usual, worth the price of admission alone. Just after Anne is bitten, she looks at her blood-soaked blouse and regards herself in the mirror, letting out a silent scream that is one of the most chilling and affecting moments I’ve ever seen in a horror film. That small moment may be my favorite piece of acting from Crampton, which is saying quite a lot. She handles every new tone the script throws at her with aplomb, making the most of the moments where Anne learns to embrace her new self. Though the montage where she drinks blood from a suspiciously goblet-like wine glass, picks up couches like they’re coasters, and dances to Concrete Blonde’s “Bloodletting” is far too on the nose, it works. If you’re a horror fan, you were probably drawn to this movie to watch Barbara Crampton vamp (again, pun absolutely intended), and she gives the audience exactly what they want. Anne revels in her own strength, beauty, and vitality, and it is a pleasure to watch her realize, for the first time in a long time, just how incredible she is.

Jakob’s Wife has the potential to be a much stronger film than it actually is. It has interesting ideas and an exciting feminist approach to vampire films coupled with strong lead performances and a third act that is brilliantly campy. The wildly uneven tone and pacing do the film and its leads a disservice, though, and it’s hard not to bemoan what might have been. With that said, it’s just as hard not to appreciate another incredible Barbara Crampton role, especially one that surprises and delights the audience in equal measure. It takes the film a while to find its footing, but — due in large part to Crampton’s performance — Jakob’s Wife sticks the landing and gives horror fans a bloody feminist horror story with bite.

© Jessica Scott and WeWhoWalkHere.blog, 2017-2021. Unauthorized use and/or duplication of this material without express and written permission from this site’s author and/or owner is strictly prohibited. Excerpts and links may be used, provided that full and clear credit is given to Jessica Scott and WeWhoWalkHere.blog with appropriate and specific direction to the original content.